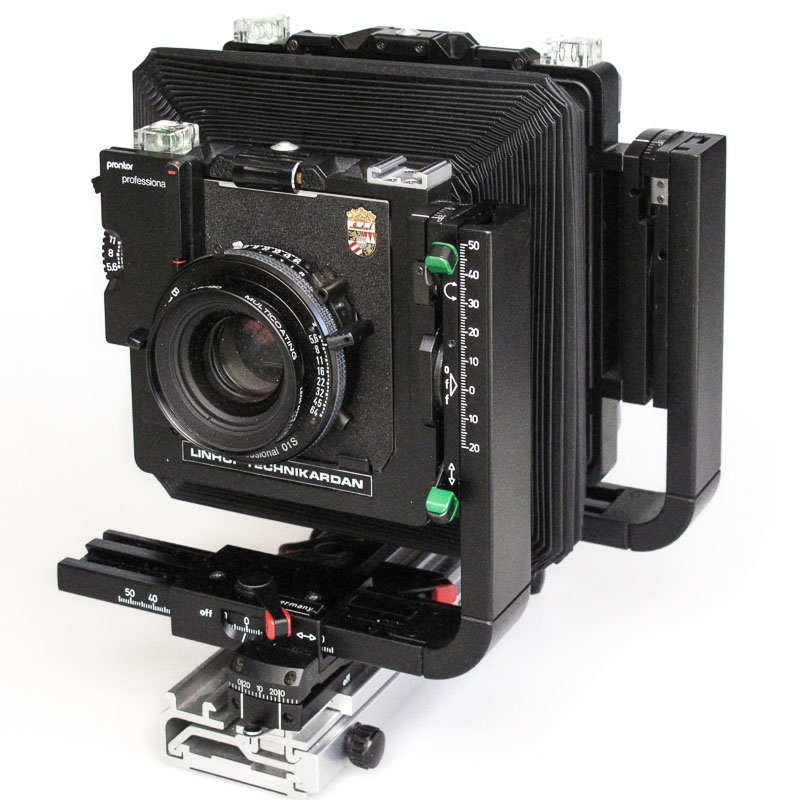 The Linhof Technikardan S 45 is a 4×5 inch or 9×12 cm camera on an optical bench. It is a precision instrument in Linhof’s current product range, as is the smaller but similar Technikardan S 23 for 6×9 cm. Both replace the older models without “S” but they are not much different from the current models.

Despite the similar name and compatibility ofsome system parts, the Linhof Technikardan S 45 differes substantially from the Linhof Technika. The Technikardan, particularly taking into account its construction principle, is a very compact camera as well, but it has no housing and can not be used as a rangefinder camera. It is, however, a fully-fledged monorail which is perfectly suitable also for wide angle lenses.

The compactness of the camera is related to the two fold extendable telescopic rails which are placed side by side. Strictly speaking, it is not an optical bench, but this construction achieves the same. Collapsed, the rails remind me of asian characters. Fully extended, the rails are not as stable as other constructions, and it is not well balanced due to the tripod attachment in the first part of the rail. An additional rail is available for stabilization and better balancing. However, due to its considerable size, I usually refrain from using it.

The compact size is also related to the standards which can be completely turned and which are attachted to different rails positioned side by side. The standards with bellows which are normally oriented perpendicular to the rails, can thus completely be turned for alignment along the rails. This ingenious construction makes the camera extremely compact for transport. It is only as long and wide as the collapsed rail. It is thus only slightly larger than a Linhof Technika, yet it is one of the smallest fully-fledged view cameras for the 4×5 inch format. Only few alternatives of similar size exist, most noteworthy the Arca Swiss F or the Toyo VX125 (which also have an elevated price tag).

Turning the standards requires practice, particularly when turning to the transport position. I have no problems with this and did not damage the bellows so far, but those who want to avoid any risk may attach the less sensitive wide angle bellows before setting the camera to transport position.

The camera provides all movements expected from a view camera. The front standard provides shift, swing and tilt in both directions. The rear provides the same, except for downward shift. The movements are more restricted than those of a standard view camera for the studio, but for my purposes it was always sufficient. Indirect movements may be used to achieve an extended range.

Except for focusing, the camera has no gears. All other movements are fixed by friction with clamps. Shifts and tilts have zero detents, which makes operation with one hand a bit awkward, but it makes zero alignment easier. This is one of the main differences between the Technikardan S and the previous version which does not provide zero detents.

The camera back can be attached for horizontal or vertical orientation. It can take the same viewing aids as the Linhof Technika. Normally, I use the camera with a dark cloth and a 7x lupe. Besides slide-in cassettes for sheet and roll film, Graflok cassettes for roll film and Polaroid may also be attached after removing the ground glass.

The lens panels of the Technikardan are identical to those of the Linhof Technika Classic. However, lenses with modified Prontor Professional shutters in the sizes 0 and 1 fit only the Technikardan. These shutters have a side panel with an aperture wheel and a lever which permits operation of aperture and shutter from the rear of the camera.

The wheel sets the aperture and can be read also from behind.

The lever provides three positions for the operation of the shutter. Besides the lowest position which sets the shutter to taking conditions, it may be moved up to open the shutter first and then shutter and aperture. Since it is a self-cocking shutter, only a flick of the lever is necessary to get from composing/focussing to vignetting and depth-of-field control to taking condition. This is much easier and faster than with the widely used Copal shutters. The shutters have disadvantages too: despite identical lens board they do not fit the Linhof Technika, the diaphragm has only five segments, and the fastest shutter speed of 1/250 s is a little less than with other shutters of this size. Still, I like these shutters a lot; in fact I use tham also with adapters on Sinar boards.

Like other view cameras, the Technikardan is poorly suited for long focus lenses. The extension exceeds that of the Technika only slighly, and focal lenghths above 400 mm can be used only with tele designs. For the Apo-Ronar 9/360 shown here it would make sense to use the stabilization rail for better balance and increased stability against shake and wind.

Use with Wide Angle Lenses

The standard bellows can be exchaned with a quick release for the optional wide angle bellows. With this bellows, wide angle lenses on recessed lens boards may be used with very short extension. The camera is thus very capable for wide angle lenses for use in landscape and architecture photography. Even the Super-Angulon 5,6/38 XL may be used, albeit restricted up to 6×12 cm due to its limited image circle. The shortest lens for 4×5 inch is the 5,6/47 XL, which must also be mounted to a recessed board. Therefore, it is not possible to use the special Technika version of this lens for the Technikardan, nor can the Technikardan lens be used for the Technika Classic.

The picture shows the camera with a partially upward shifted Super-Angulon 5,6/58 XL which is mounted on a flat board.

I use this camera with a Gitzo carbon tripod series 2 and a geared Manfrotto head 410. A ball head is not appropriate for this camera. On top of the quick release plate of the head I fixed another quick release system which provides a rail and which is fixed with two screws to the camera. The Manfrotto 357 system is well suited and provides stability on flat surfaces when the camera is taken off the tripod. The small Arca-Swiss MonoballFix System is too narrow to place the camera on a flat surface.

What is in my Camera Case?

My equipment fits into a small Rimova Trolley. Typically, it consist of:

Depending on the task, individual lenses may be omitted or exchanged for others. Instead of the Grafmatic cassettes, a 6×9 Super-Rollex also fits into the case. The total weight is 33 lbs (15 kg) which can be carried only for short distances. Due to the small wheels of the trolley, it is suitable only for flat ground. For uneven ground, another trolley with larger wheels makes sense.

Like other Linhof products, the Technikardan is a precion instrument which is made in Germany. Accordingly, it can not be had for a discount price. The used market is an option to purchase a camera in good condition for about 1100-1400 €.

The camera is a robust construction for use in the studio and in the field. The only gear is made from metal and durable. The standards may require adjustment for secure positioning, which can be done by yourself. Like with all large format cameras, the bellows is subject to wear and should be carefully inspected. See the Linhof Technika for this. When purchasing a lens for the Technikardan, it is worthwhile to look for a model with the Technikardan shutter.

My Experience with the Technikardan

Finally, some pictures made with this camera:

I provide this information solely because I like photography and because it may be useful. I have no commercial relationships to any vendor or manufacturer mentioned in this post. The camera and all supplementary parts are my personal property.